As you can tell, I have used many different materials cover small, young plants. Although I imagine the Brussels sprouts and Broccoli to be quite hardy to these weather conditions, there are tender greens sprouting like lettuce, spinach, kale, which I want to ensure protection from snow and frost that may accumulate. And using the plastic and row covers will trap some heat. 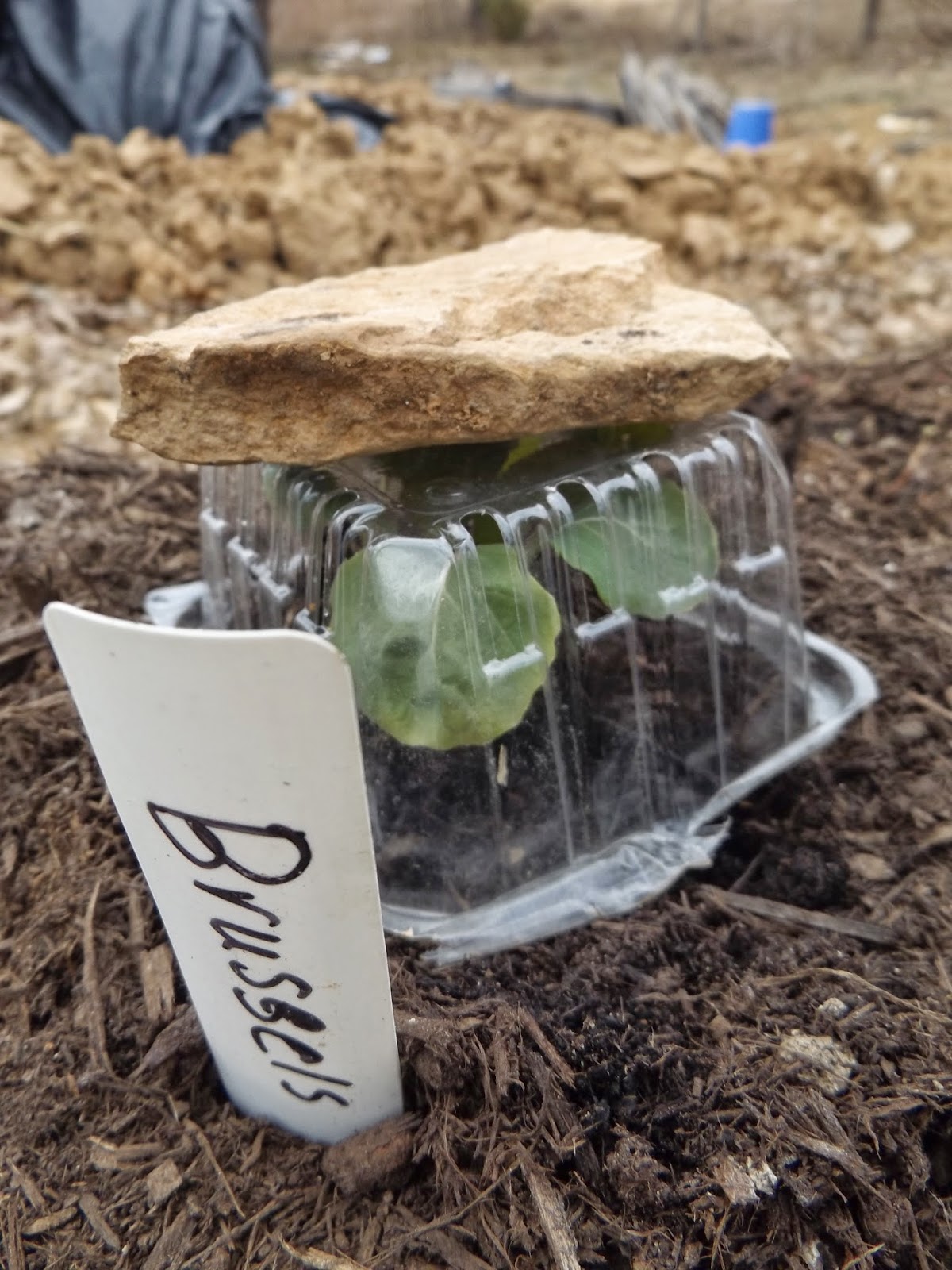 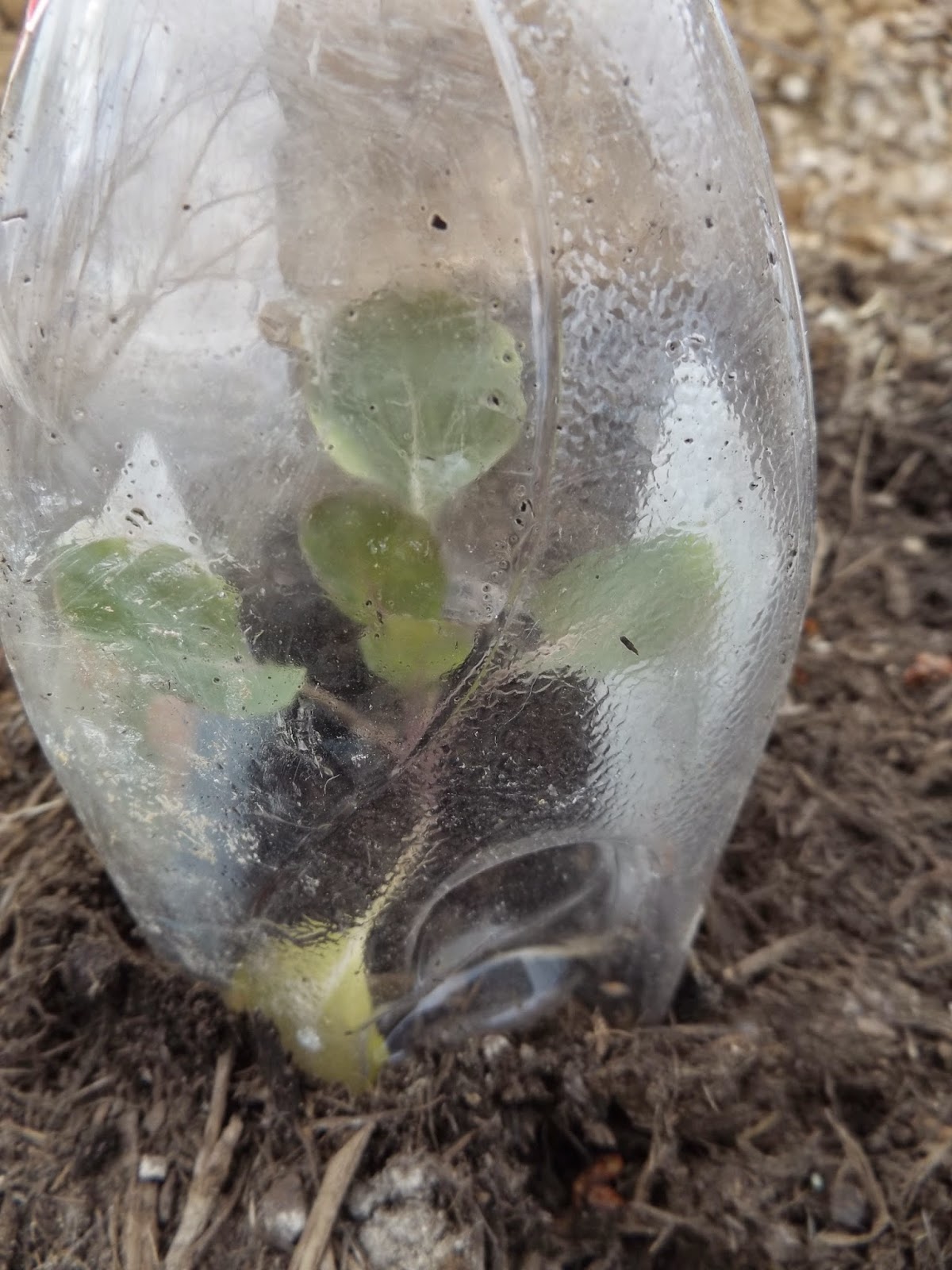 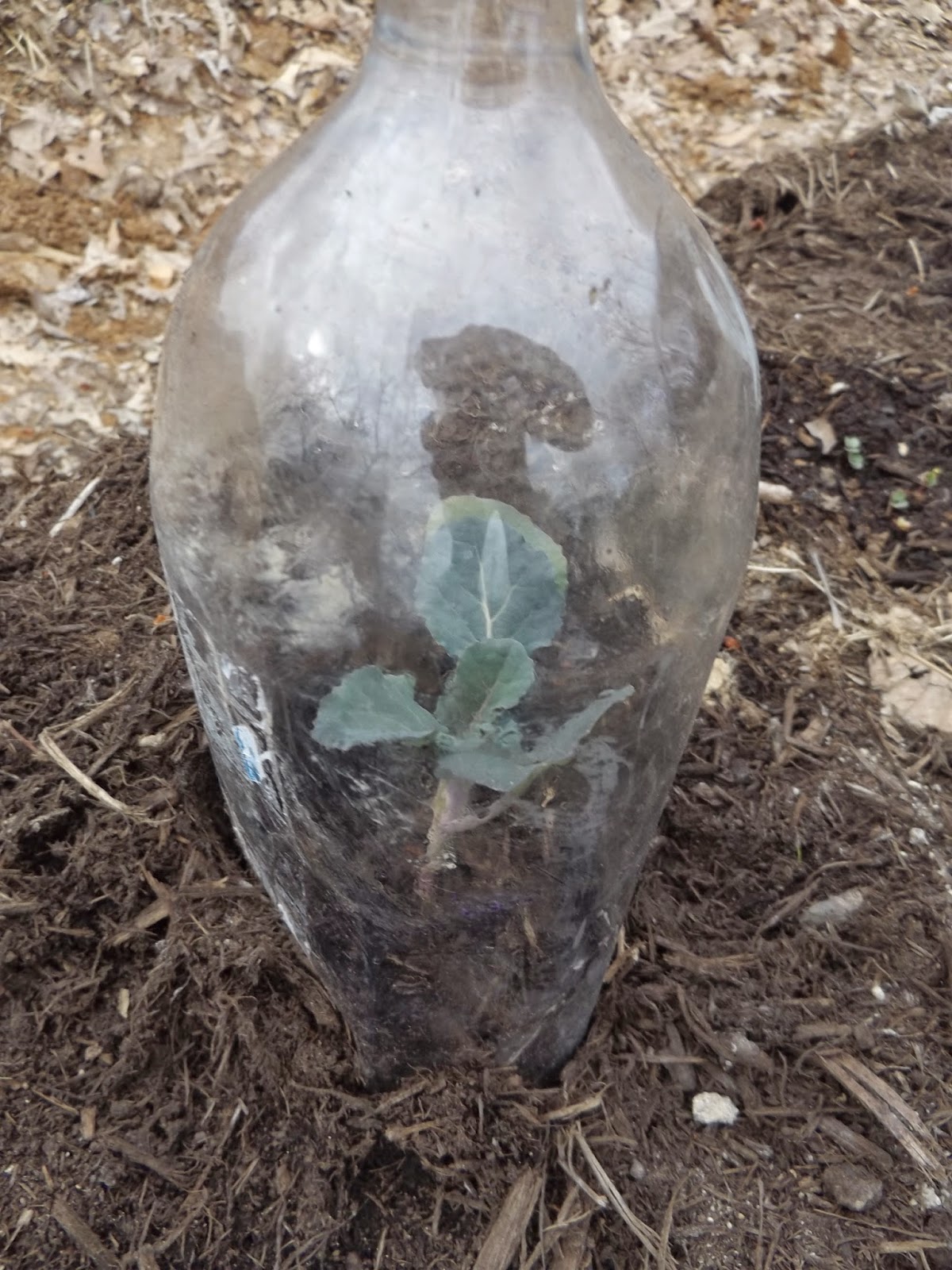 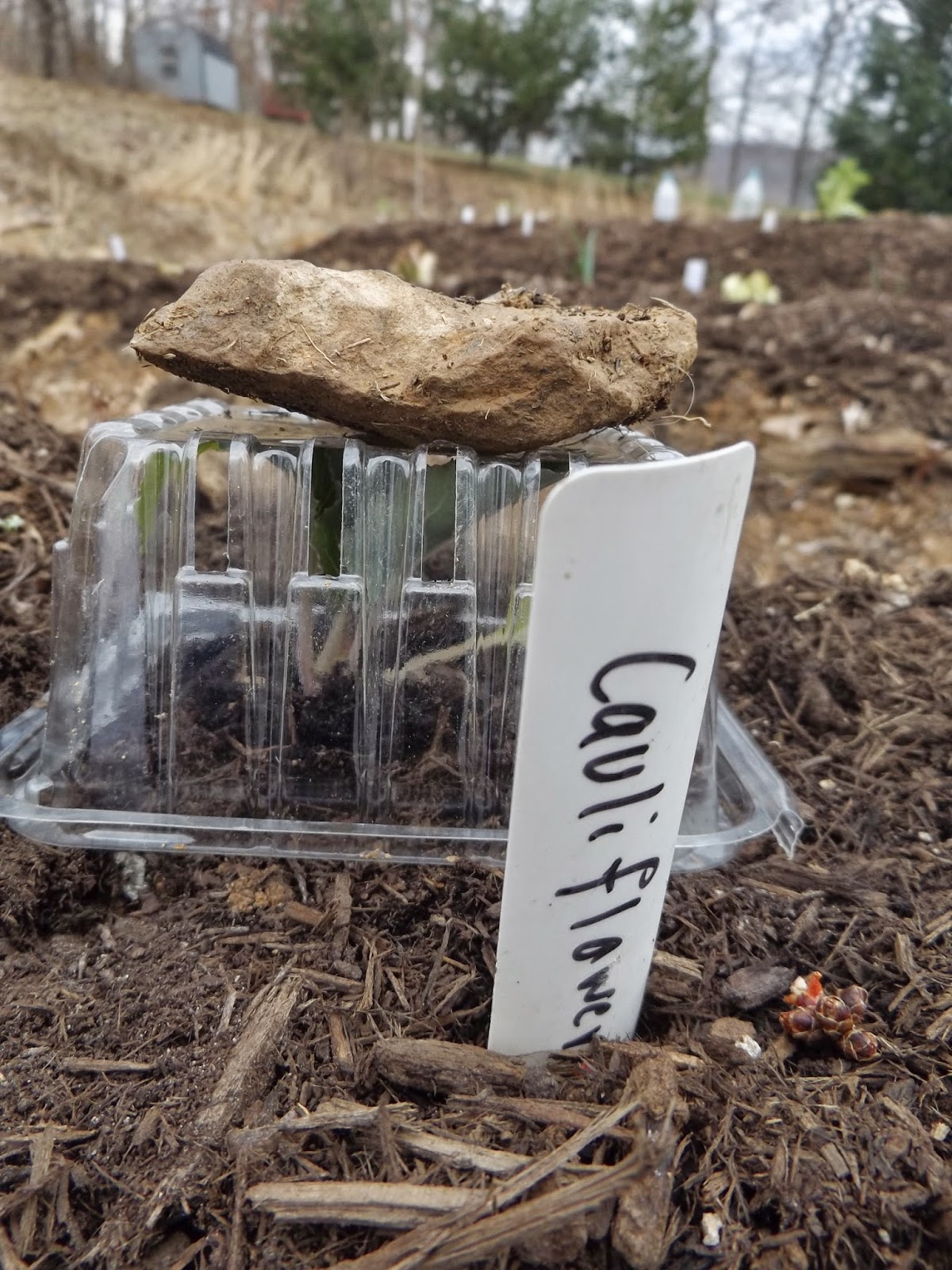 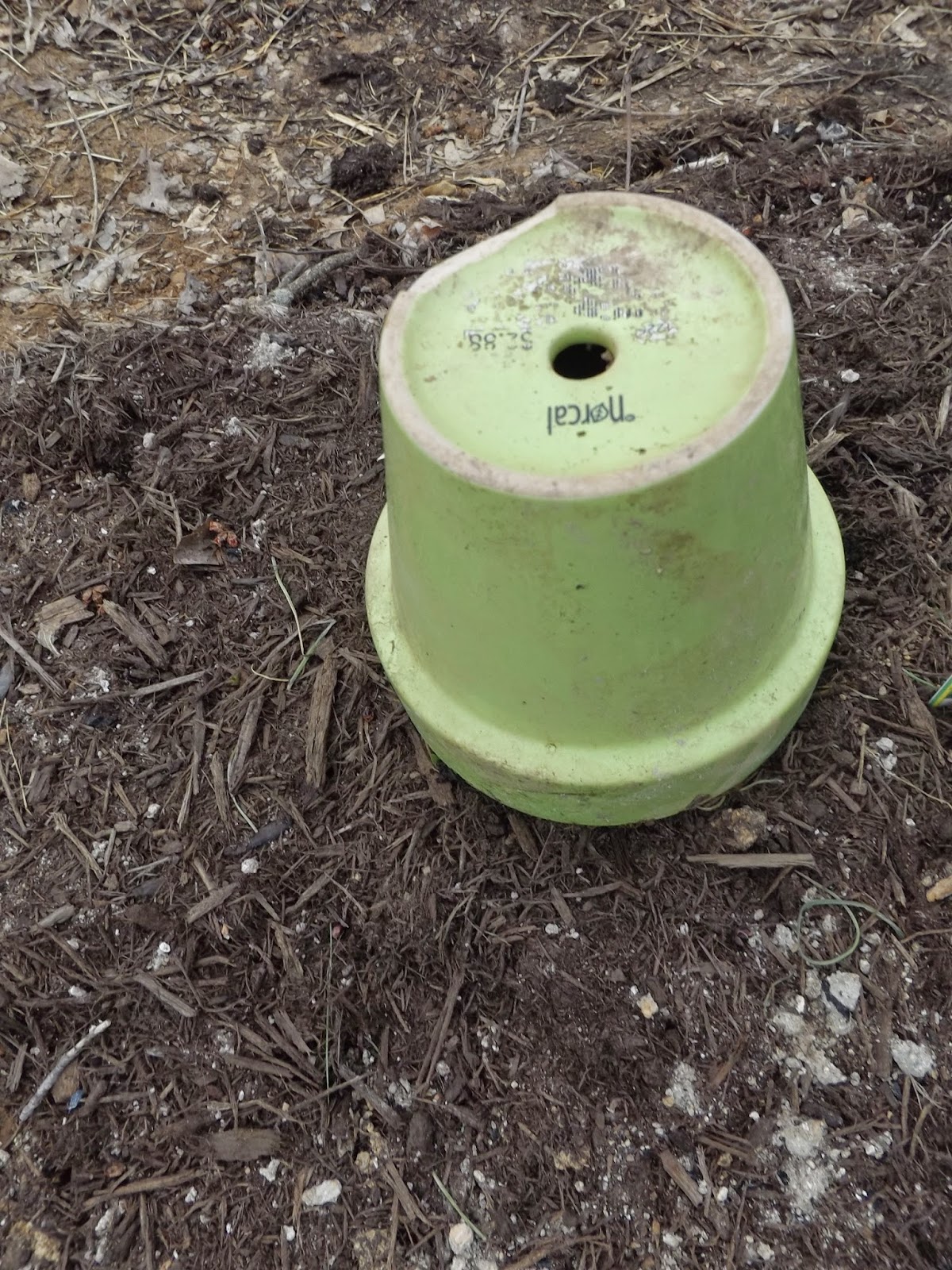 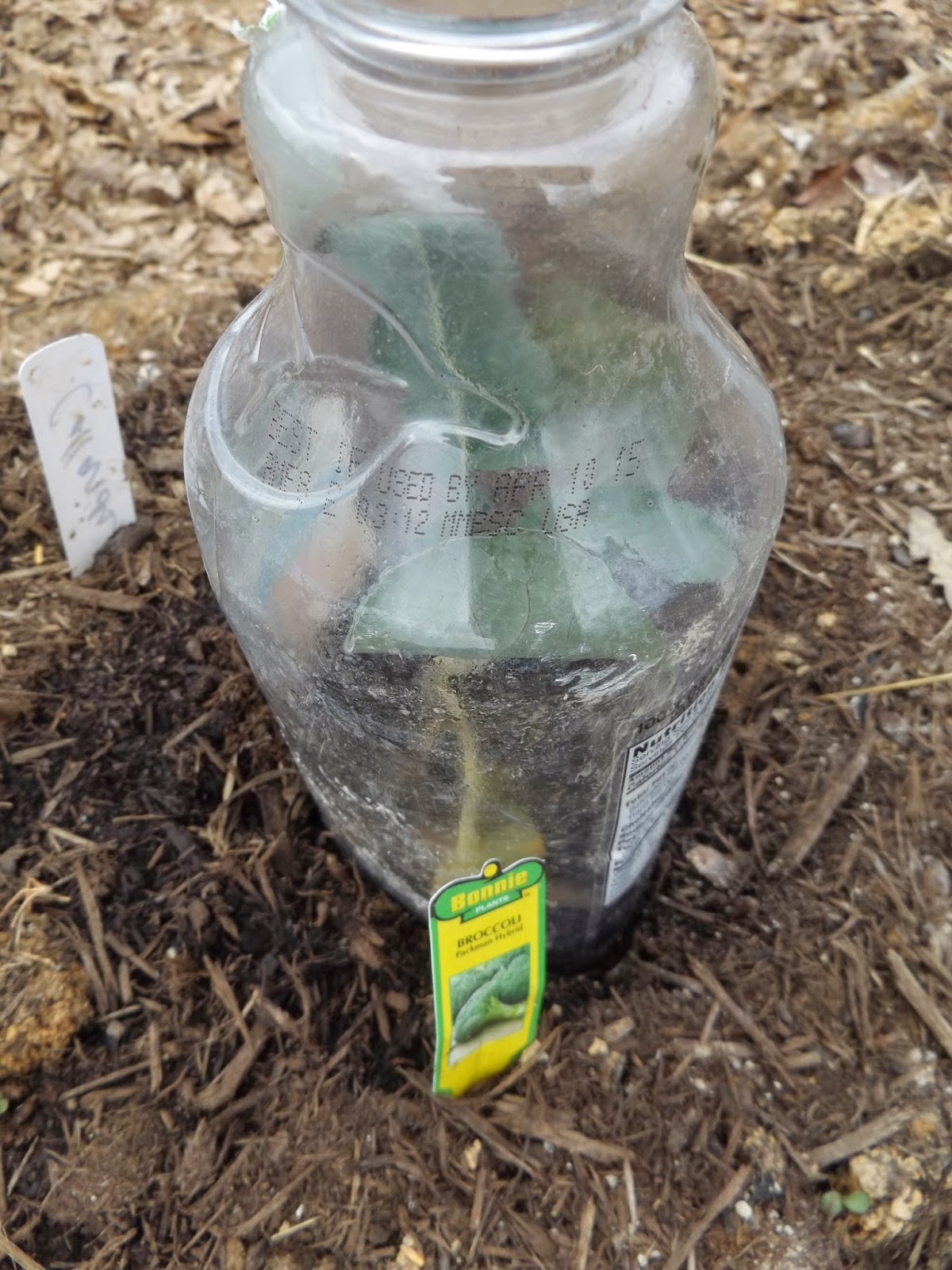 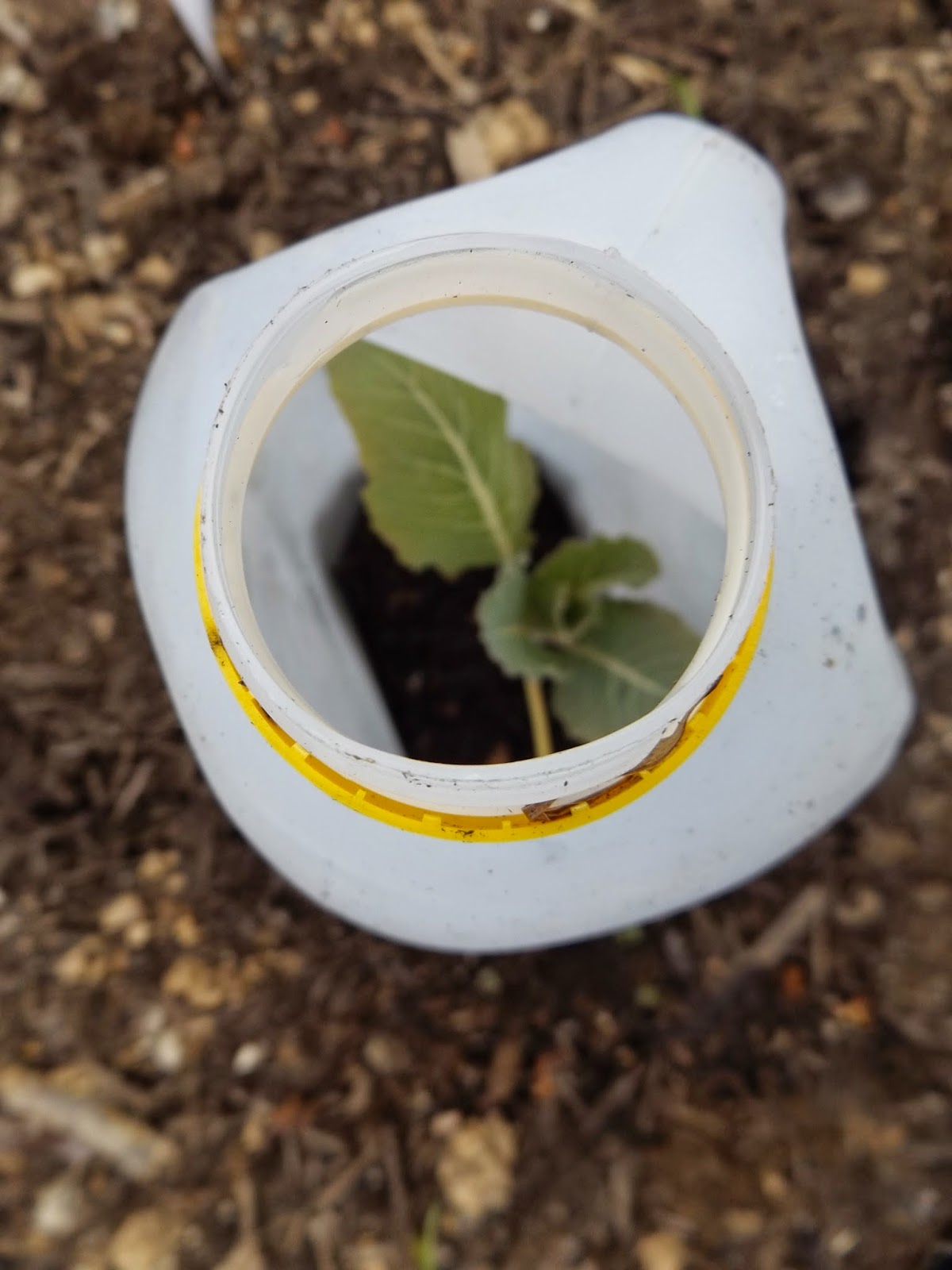 I made sure to cover the flowers too, except the Daffodils and Scilla flowers--there are too many clusters around the house to cover. I did cover the Hyacinths and Tulips, one with an old plastic fish tank and the others with recycled refrigerator shelves.
Today's cold weather was a contrast to the sunny, warm weather we had for the last two weeks. We had freezing winds bringing in snow, which came as quite of a surprise. Quickly I cut bottles to put over the starter plants, then James and I covered the four Hugelkultur mounds with transparent plastic and row covers to retain heat through the cold night. The forecast predicts temperatures to drop to 24 degrees F tonight and tomorrow night.
Posted by Cassie K at Saturday, March 28, 2015 No comments: Links to this post

I showed you the many Cabbage plants growing underneath the plastic bottles. From several days ago, nearly half of the Cabbage starters died. Many of them were weak and it was to be expected. To fill in the spots where Cabbage had died, I replanted Brussels Sprouts, Broccoli, and Cauliflower, and Lettuce starters.

The garden looks much more alive and well... 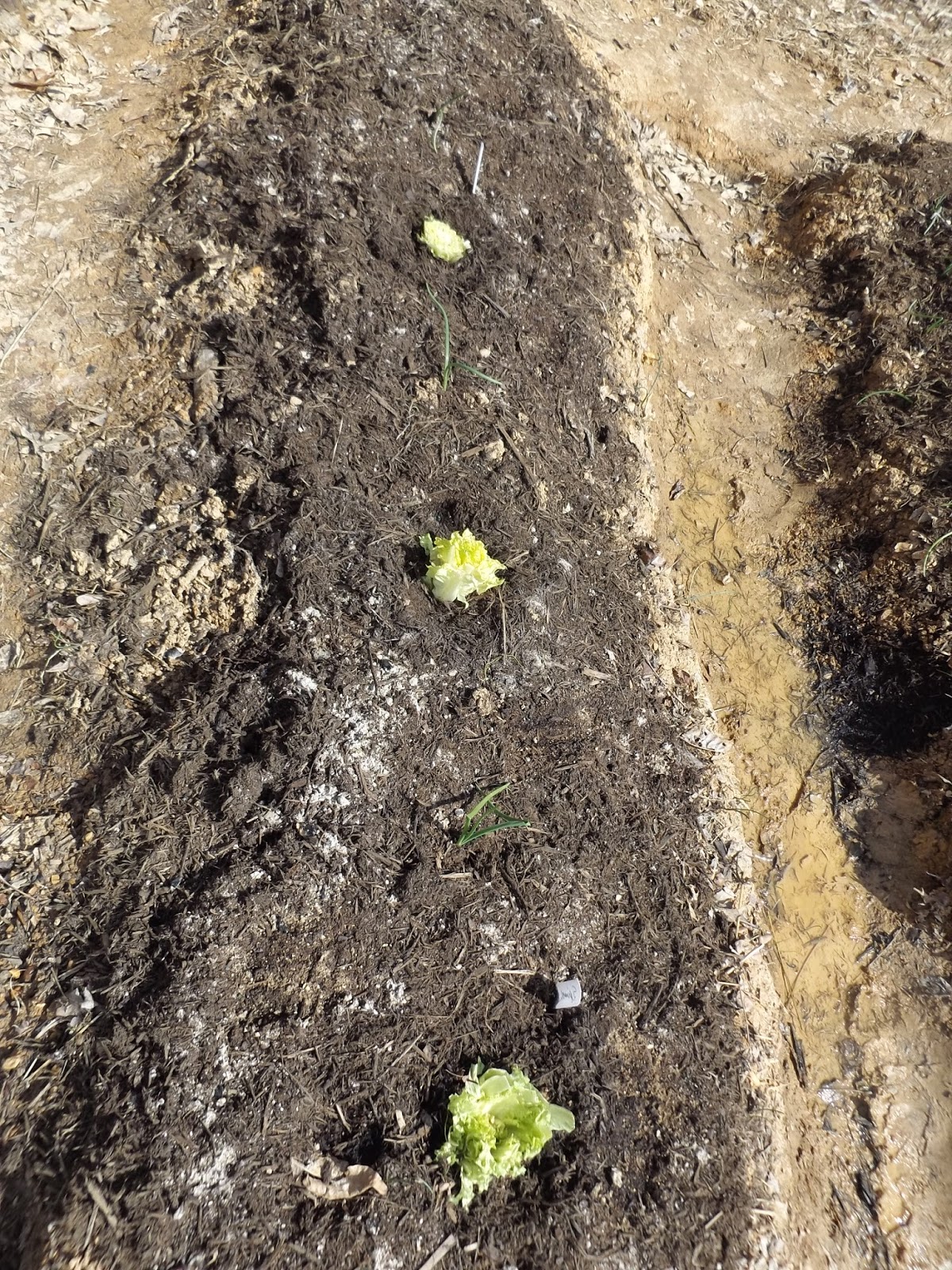 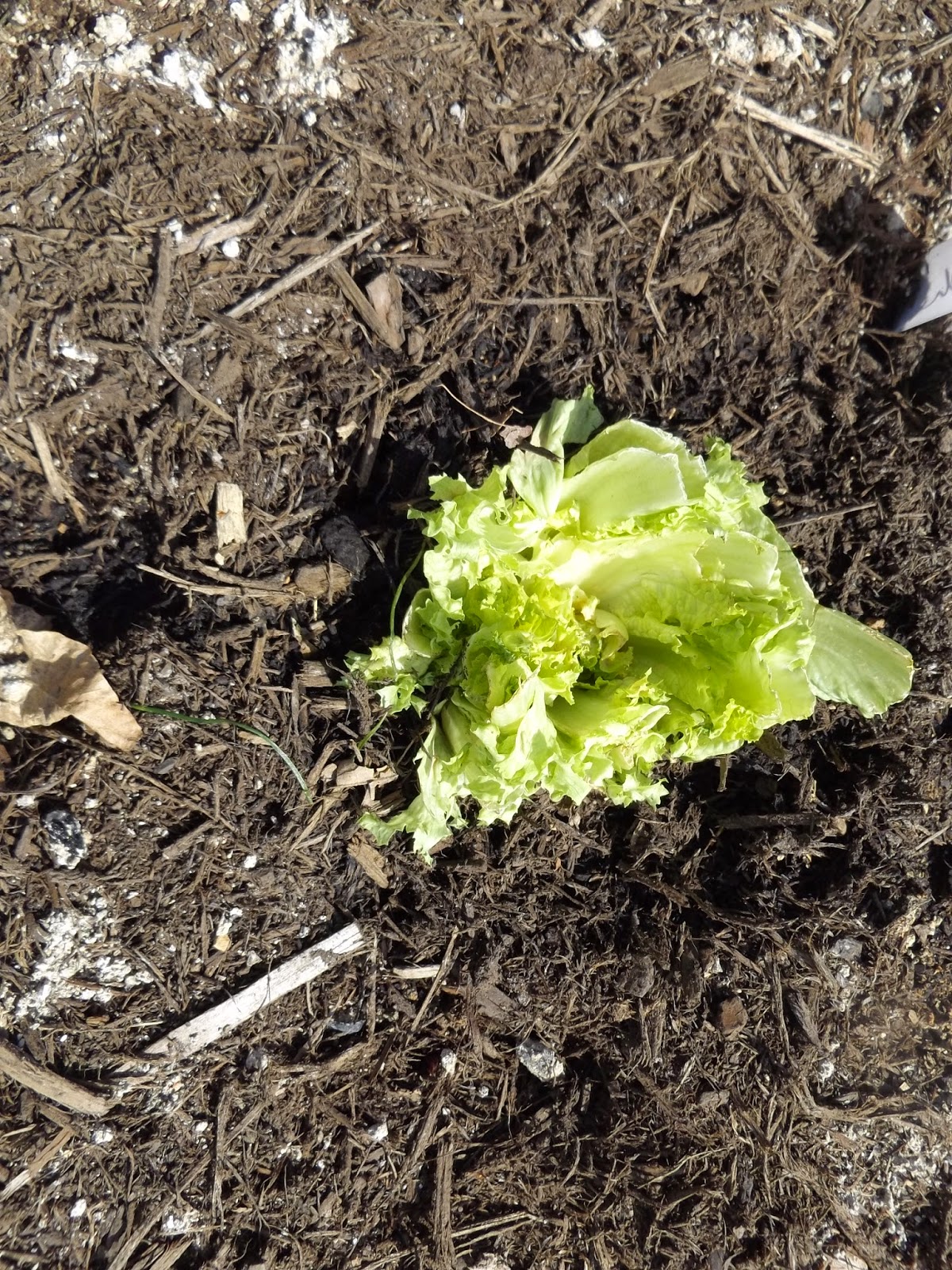 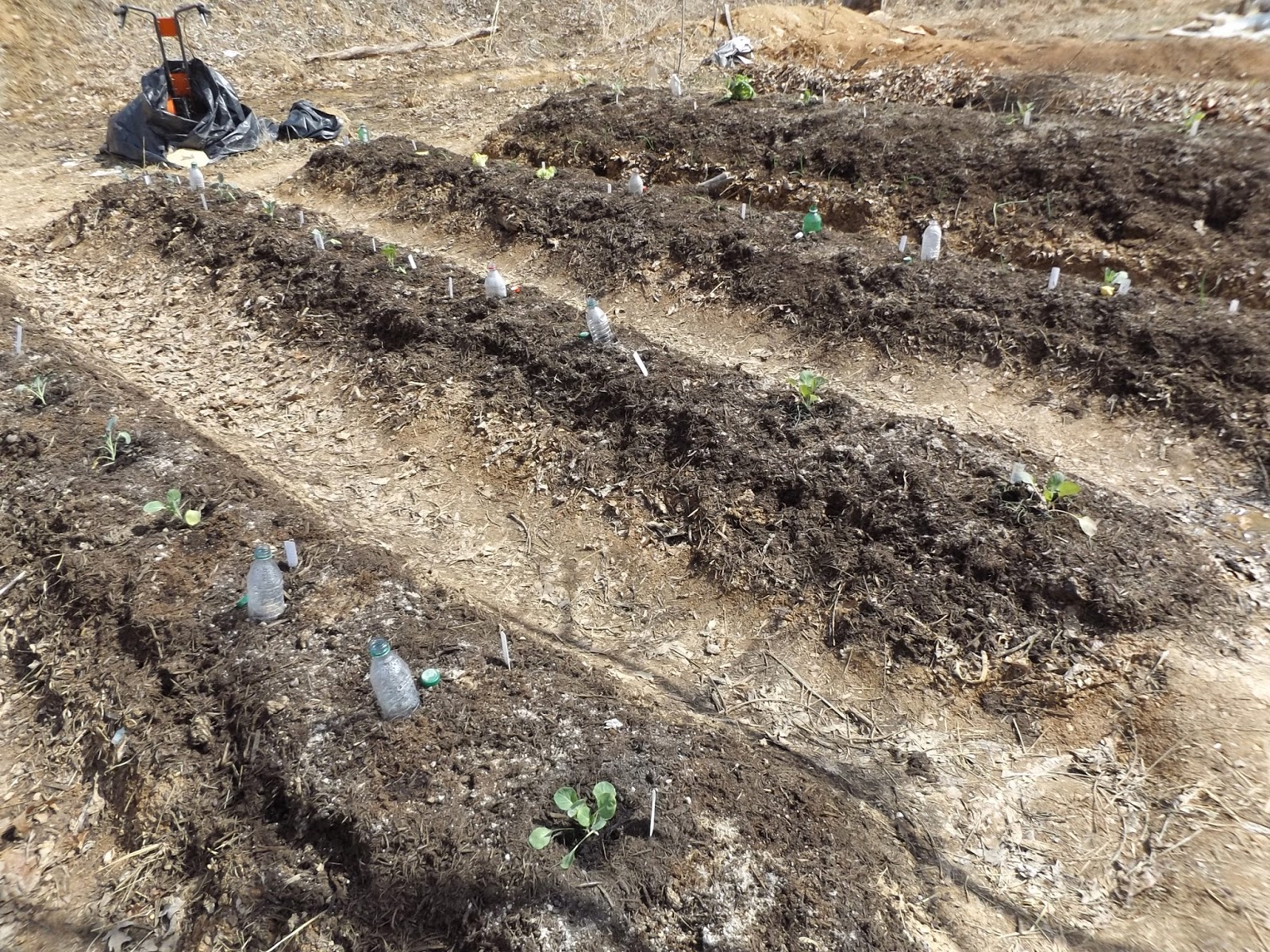 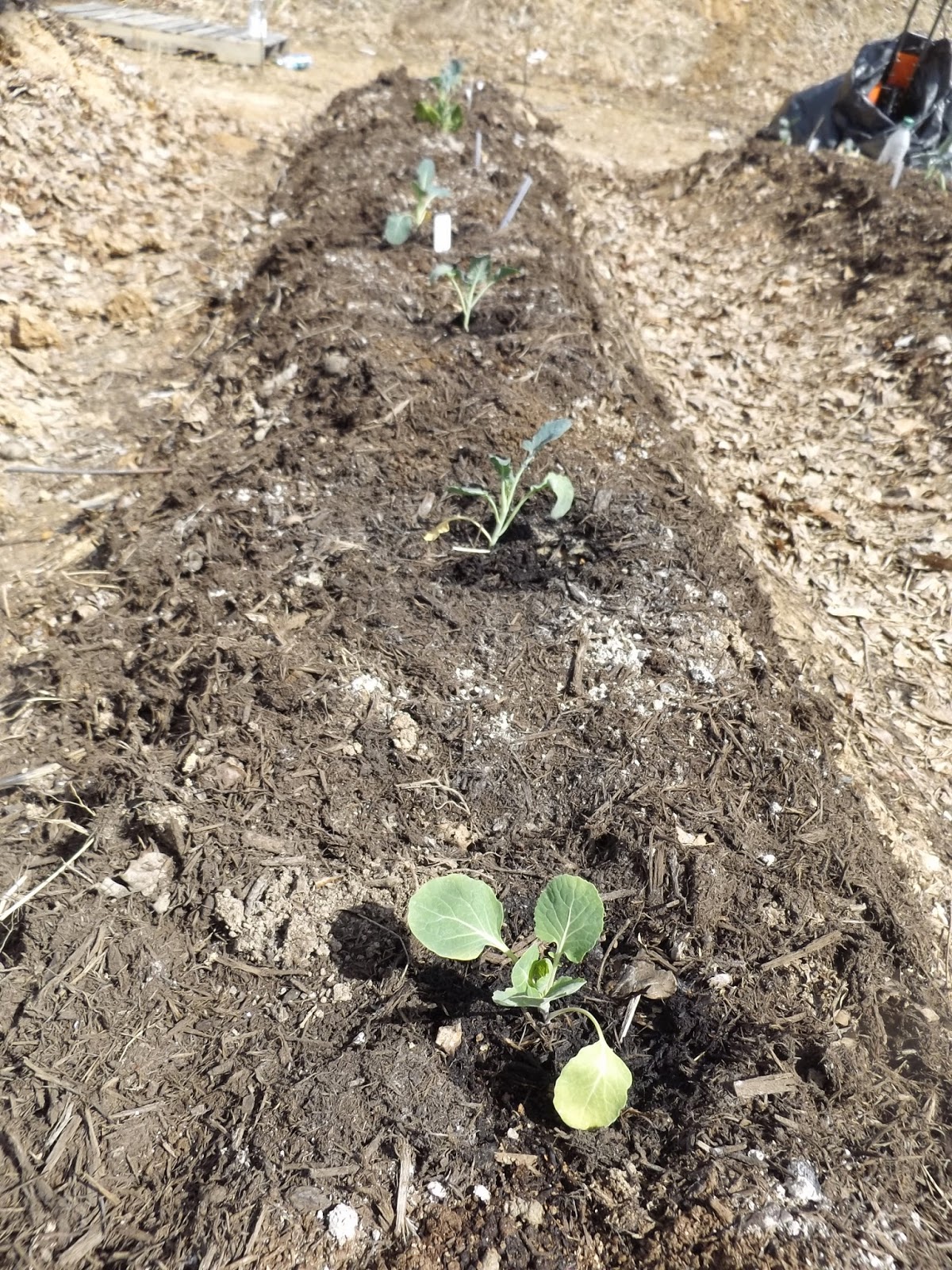 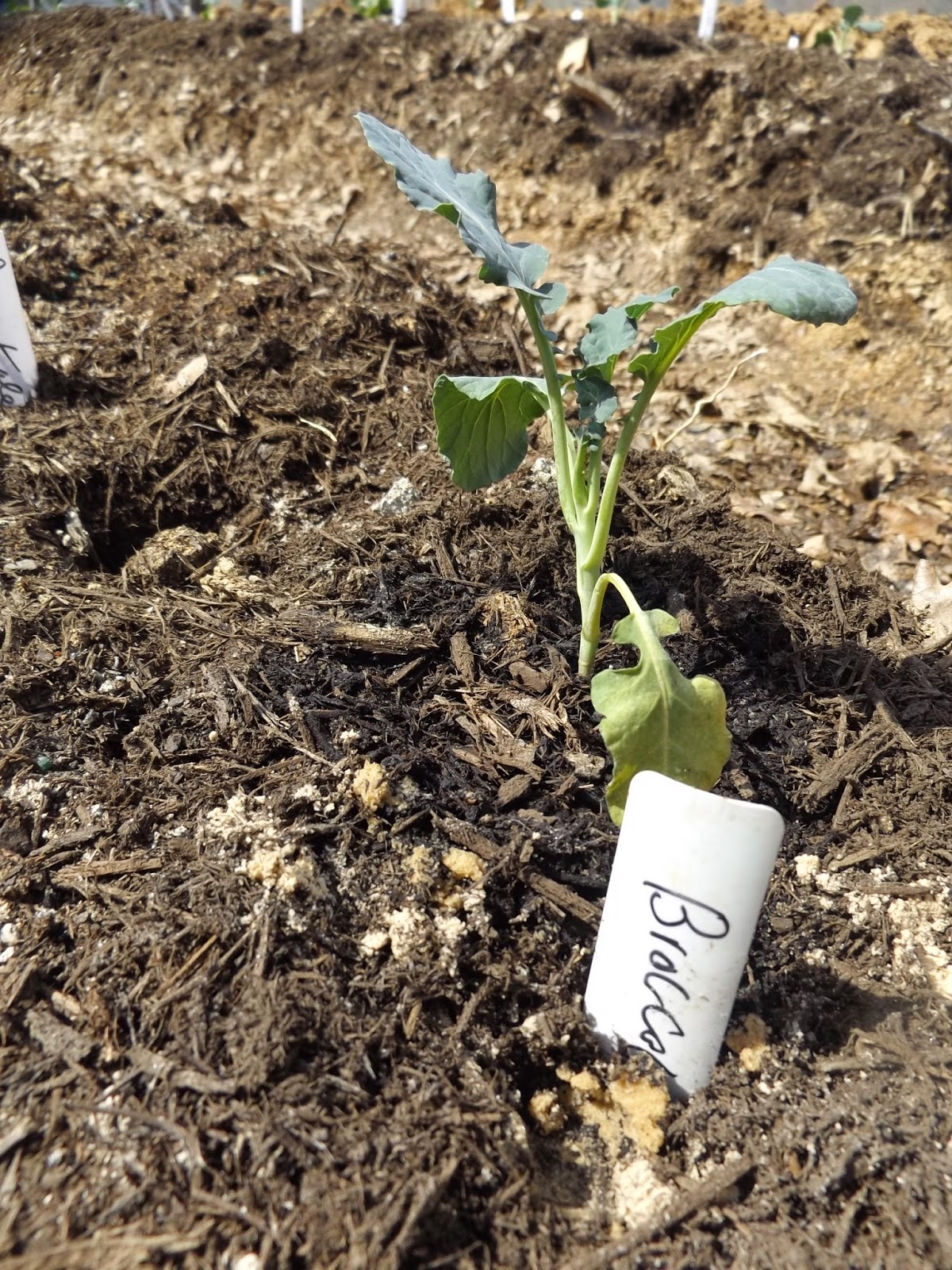 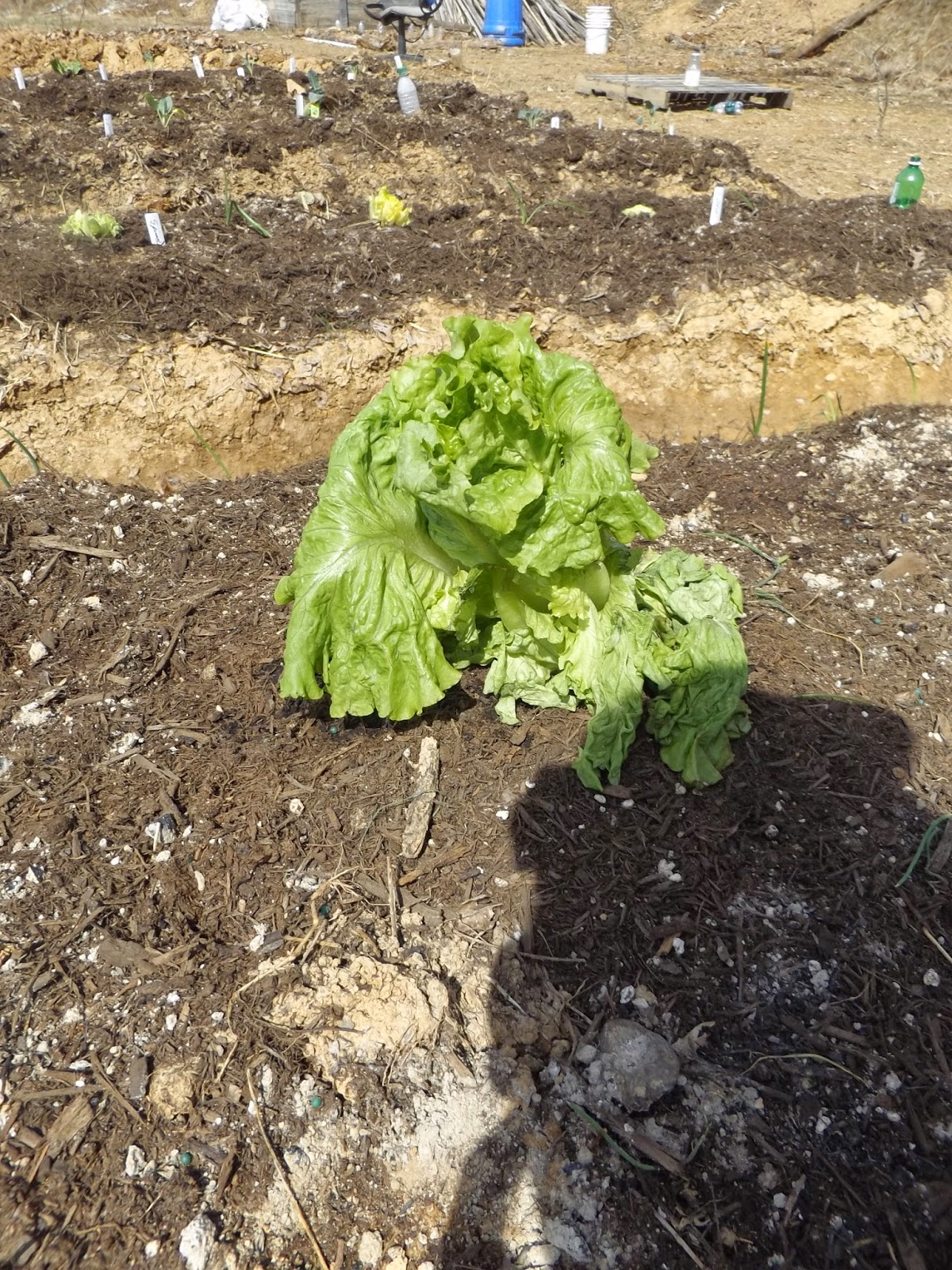 In small patches, Lettuce, Spinach, Kale, Collards, Radish, Turnip, and Kohlrabi were directly sown in the mulch layer of the Hugelkultur mounds. Of course I have heard tiny seeds will not sprout through mulch, which is why I made holes within the mulch to add fine garden soil. Each vegetable has 10-15 patches growing in between the starter plants. I planted these days about a week ago or less. In the following weeks or month, we expect to begin harvesting from the greens. 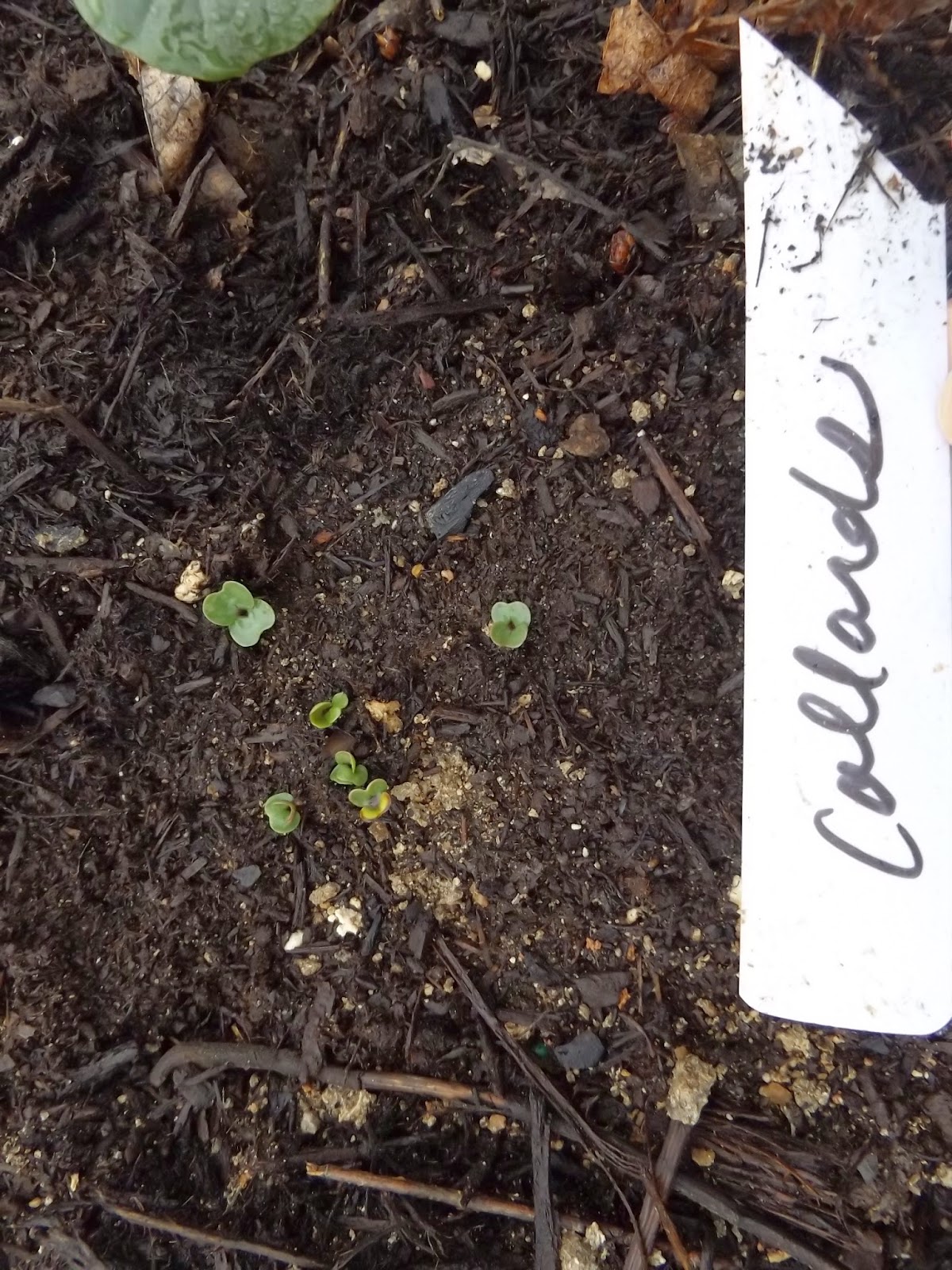 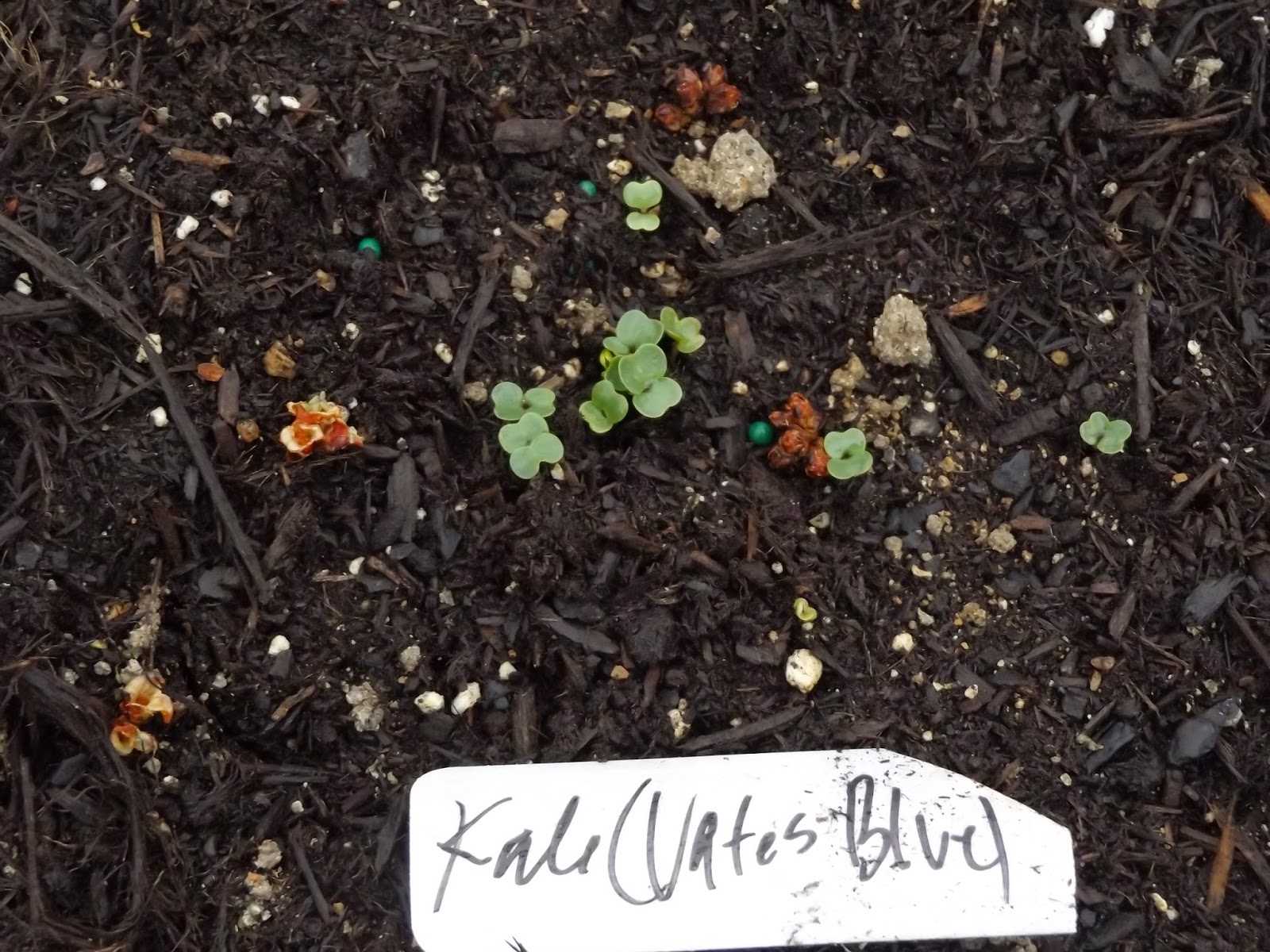 For a detailed view of the Spring garden, watch the video posted below:

"1. The earth has more than 80,000 species of edible plants.
If you’re ever in the mood to try something new, the good news is that there is certainly food you haven’t tasted yet still growing somewhere in the world. You’ll probably have some trouble finding it, however, because …
2. 90 percent of the foods humans eat come from just 30 plants.
Out of tens of thousands of plants we could eat, mankind chooses to consume only about 30 of them. It’s crazy to contemplate how limited our diets are compared to all of the different foods we could be eating. If you think the selection of which plants we eat has anything to do with their nutritional benefits, however, you’d be wrong …
3. Nutrition doesn’t factor into the crops we do mass produce.
The world’s largest farmers have pursued certain crops because they can grow a lot of them more quickly, easily and inexpensively to turn a better profit. As a result, most of the most healthful plants stay off of our dinner plates because they aren’t available at grocery stores. Still, sustenance isn’t the only thing humans rely on plants for …
4. 70,000 plant species are utilized for medicine.
As it turns out, humans are more diversified in the plants we use for medicine. Although a large portion of that figure applies to traditional medicine, modern medicine is not excepted from plant help. Half of the drugs prescribed in the U.S. have plant origins, many coming out of the rainforest, yet …
5. Only one percent of rainforest plants have been studied for medicinal potential.
Given how valuable plants can be medicinally, the rainforest houses a host of possible cures for ailments new and old. This untapped resource could still hold the key to medical breakthroughs. Of course, a lot of this potential could be lost considering …
6. 80 percent of the Earth’s original forests have been cleared or destroyed.
The same forests that dominated the land 8,000 years ago are all but gone. Approximately four-fifths of the forests are gone thanks to human intervention—just think of how many plant species may have been lost in that process. If you thought protections were in place, actually …
7. Just 10 percent of the world’s plant-rich areas are protected.
Of the most biodiverse areas on the planet, only 10 percent are officially “protected” to ensure the survival of a multitude of species—plant and animal alike. Worse still, many of the supposedly protected areas are done so nominally only, leaving plants threatened by external factors they should be safeguarded from. This is especially problematic because …
8. More than half of plant species are native to just one country.
Chances are, a plant you find in one part of the world is not currently growing anywhere else. As plant habitat is ruined, there’s little point in hoping that the killed plants could be found and harvested somewhere else in the future. For this reason …
9. 68 percent of plants are in danger of going extinct.
While scientists have only examined a fraction of the existing known plant species, of those that have been studied, 68 percent face extinction in the not too distant future. Since plants can’t just up and move as their habitat is being destroyed, they are even more vulnerable than endangered animals. It’s happening quickly, too, since …
10. Plant species are going extinct—about 5,000 times faster than they should.
Some will argue that species would go extinct even without human interference. While that’s certainly true, it’s the rate that plants are dying off that raises alarm. Thanks to climate change, deforestation and other human-influence factors, experts believe that species are going extinct somewhere between 1,000 and 10,000 times faster than they would naturally".
Posted by Cassie K at Friday, March 20, 2015 1 comment: Links to this post

Email ThisBlogThis!Share to TwitterShare to FacebookShare to Pinterest
Labels: collapse, facts, how to end logging, how to save the planet, plant diversity, rainforest, wild edibles

What to grow in March in Zone 6 & Making raised beds

For the last couple of days, Kentucky was in a flood warning due to the amount of rain we were receiving; and eventually I managed to transplant cabbage, onions, and garlic bulbs, since we got a break from the rain. James and I were able to plant Cabbage starts, red onion bulbs, some shallots and garlic yesterday. We planted garlic and onion around the Cabbage plants to deter snails, caterpillars, and other things. Although I have heard weak plants put off stress hormones that attract destructive bugs, I have found that even the healthiest Cabbage and broccoli plants are vulnerable to many insects-- even rabbits!

Because March and April will predictably stay cold at night, I am using cloches to protect plants during the night. As you can see from the photos, I am using plastic water bottles which. I cut the bottoms off the bottle to place over top of each Cabbage plant. The cap is left off the bottle to allow the plant to breath. Without thinking, I was cutting the tops off the bottles then realized it was more efficient the other way. There are many ways to protect plants using recycled materials, which you can see here: Cloches plant protection (early planting & extend growing season).


Yesterday reach 74 degrees, with partly cloudy skies--which was perfect conditions for transplanting starters. Of course I had another tray of cabbage starts to transplant. That particular tray of Cabbage starts are some of the weak plants which I am growing separately from the healthy Cabbage. The weak plants are being transplanted to the compost bed. I covered these plants with plastic bottles as well.
﻿﻿﻿


In the Hugelkultur mounds, we have planted up to 40 healthy Cabbage plants and over 100 red onion plants/bulbs. Yesterday I directly planted Buttercrunch Lettuce, two types of kale, spinach, Collards, and kohlrabi within the cabbage and onion plants in the Hugel mounds.
I did not directly sow seeds within the mulch because the tiny seeds may not grow through the big pieces of wood chips. Instead, I made medium-sized holes throughout the mulch to fill with garden soil. The fine, loose garden soil are better growing conditions for tiny seeds.
If the weather permits, I expect to present a flourishing variety of greens and root vegetables within a month.

We recently purchased 9 Brussel Sprouts plants, 9 Broccoli plants, and 9 Cauliflower plants which will be planted within the Hugel mounds.

Today I directly planted 80+ Lincoln variety Green Peas. Because I have onions growing throughout the Hugel mounds, I am growing Peas in a different location since Peas and Onions are bad companion plants. Off to the side in the triangle garden, I planted Peas around the fence. My method was making a small circular ditch around the fence, then adding garden soil to the ditch for directly sowing the peas.
﻿

I was also able to plant Maiden Pinks and Delphinium flower seeds. I planted the flower seeds in the raised bed (in front of the Hugel mounds). This raised bed is dedicated to some short flowers, herbs, and other vegetables with some tall flowers. The raised bed was formed within a couple of hours a week ago, by laying out cardboard, then dirt and mulch on top. I added logs to outline the raised bed/contain the soil and mulch.

It was another productive gardening day for me. I planted Peas, flower seeds, watered the garden, then assembled another raised bed. The raised bed seen in the picture above is situated across from the bed seen below. It was also formed by laying out cardboard, small sticks and leaf litter with dirt layered on top. Here I will grow Perennial herbs such as Thyme, sage, mint, and catnip in the hopes that they spread their seed in the field next to the house.

The Forecast is giving another chance of rain for Friday, so I have extra days to assemble two additional raised beds. One raised bed I'm working on lays slanted on a bank, situated beside the Paw paw trees. This bed will be growing Goji berries. The additional raised bed (I have not started yet) will be placed underneath an Apple tree where I will grow a variety of other herbs and flowers.
Posted by Cassie K at Monday, March 16, 2015 No comments: Links to this post

The one material I disagree with using is the Wool. The Wool industry is cruel, and instead I would use denim as insulation. Along with the denim, natural home builders use aluminum foil as a reflector for light to generate heat.
The lumber industry is another cruel industry that rapes forests, so I'm not comfortable with having someone kill a living tree for me. Instead I would build a small scale home that requires no logs. If wood is mandatory I will find dead and dried logs from the woods. Unlike trees, bamboo and hemp grow quickly to be utilized for mass production. Bamboo could be used for framing, doors, and flooring.
I highly recommend using all natural materials like mud, straw, and sand for the majority of your home (walls & flooring). When you're making your cob and stacking the cob to the walls, you want to save as much material as possible. Then using other materials like recycled glass bottles allows you to use less of your materials. Use recycled materials you have on hand such as glass bottles, tires, rebar, and more.
By reducing the amount of trash we produce, and reusing the trash that already exists will allow us to clean up our environment.
Posted by Cassie K at Wednesday, March 11, 2015 2 comments: Links to this post